Magnetic tape was first used to record computer data way back in 1951. If you see the tape decks that feature in ‘computers’ in vintage movies, it’s hard to believe the medium is still around… let alone at the cutting edge of data storage. In fact, magnetic tape is thriving with strong sales of LTO Ultrium, the current de facto standard.

Just like vintage fashions that won’t die (mom jeans, dad sneakers, bum bags anyone?) LTO might seem daggy and basic at first glance. It doesn’t have the shiny new excitement of cloud or other more marketable storage offerings. But it is very popular in the Australian production industry and with us. LTO is hard to beat as a long-term archive medium and here’s why:

LTO boasts an impressive 15 to 30-year lifespan. In comparison, HDDs are more volatile with a higher failure rate and a life expectancy of around 5 years.

But buyer beware. The 30-year prediction only applies to tapes stored in a clean, controlled environment. With both temperature and humidity regulation. The ideal environmental conditions for LTO storage are 18°C and 40% relative humidity. (Luckily for us, we already have a custom-built film and tape vault). 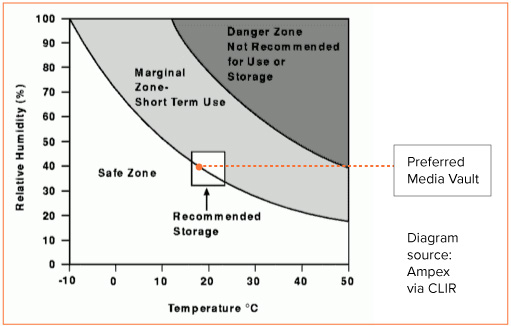 This is one of the reasons studios and networks list LTO as a deliverable. Also one reason it’s favoured by insurance companies.

LTO stands for Linear Tape-Open. ‘Open’ refers to ‘open standards’. That means that the tech is available for license by multiple vendors. LTO was developed by Certance (now Quantum), Hewlett Packard Enterprise, and IBM in the late 1990s. They created LTO to compete with existing proprietary formats of digital tape. The three companies form the LTO Consortium and they work together to manage the medium, certification and licensing.

With multiple sources of media and drives, the format has resilience. Obsolescence doesn’t hinge on the success or failure of one manufacturer. Competition keeps prices in check. And affordable media is popular media, which is less likely to become an entry in the Museum of Obsolete Media.

Wouldn’t it be great if you could see exactly what storage options will be available in 10 years’ time? Especially if you are pondering the capex outlay required for an LTO setup. Well, you can get a decent idea with the LTO Roadmap.

The LTO Consortium publish a roadmap with predicted specs for future generations of tape, to provide certainty.

Media format obsolescence is inevitable, but a roadmap makes it manageable. LTO drives are also mandated to be backwards compatible to at least one generation.

Recent research shows that 330TB capacity cartridges are a real possibility. So the roadmap is not just wishful thinking.

All digital storage media are subject to error, but LTO is reportedly four orders of magnitude better than disk.

One of the beauties of tape, particularly as an archive medium, is its removability. Not a sexy quality at all. But very useful. It means that tape is portable, cartridges are easily stored offline or transported offsite. And storing tapes offline is a sure way to thwart sophisticated cyberattacks like ransomware. Ransomware attacks have more than doubled this year. As we saw from the attack on WPP in 2017, the threat is real. Especially for creative companies who not only rely on data for day-to-day operations but also create value in IP.

Storing tapes offline also preserves files against glitches and accidental deletion. And LTO can be encrypted on-the-fly. In fact, IBM are developing protections against attack from computers that don’t even exist yet.

Video files are only getting larger. So it’s handy that the current generation of tape is capable of storing up to 1600 HD movies per cartridge.

Unfortunately, video files also don’t compress well. So the reported potential capacity of 30TB compressed doesn’t mean much to us. But 12TB per cartridge native for LTO-8 is not to be sniffed at.

All the reliability and capacity in the world would mean nothing if LTO wasn’t affordable. That might sound miserly. But content creatives and audiovisual archives are facing the reality of growing data sizes every day. Technology marches on. Better cameras and more of them, higher shoot ratios, and higher resolution files. All multiplied across a growing archive of content… Add downward pressure on budgets and the bottom-line looms large.

Individual tapes are cheap especially when compared to disk. But there are many factors to consider when calculating cost. It’s important to consider the total cost of ownership of a tape storage system:

LTO works for us because we already have the experts, the climate-controlled vault (with a solar installation), and the data volume. So happily we can pass those cost savings on to our clients.

Tape is far from dead – but there are some things to watch out for.

Tape doesn’t have the fast access speeds of HDDs or SSDs for retrieval. It is linear by nature and that is both its strength (allows for capacity) and its weakness (slower to access).

But speed is not a deal breaker. We mostly use LTO for archive content that doesn’t require instant or frequent access. And with large files like media files, the random-access time issue is less relevant.

Tape has been proclaimed dead many times. Amazon Glacier and now Deep Glacier have been called ‘tape-killers’. Cloud storage is still the bright, shiny and new storage option. But upload and download speed along with restore fees mean that sometimes it promises more than it can deliver.

We do use cloud in our storage mix, so we’re not knocking it. But Cloud hasn’t put an end to tape yet. Indeed, if you look behind the scenes at major cloud providers, you’ll often find a huge tape library. Although they have denied it, there are even whispers that Amazon built Glacier on tape. And Google and Microsoft Azure definitely use LTO tape.

Is there a tape shortage?

Despite having an accessible open standard, the number of LTO tape manufacturers has whittled down. From six in recent years to just two – Sony and Fujifilm. And it seems like each is trying to shrink the pool further – to just one supplier.

The two recently settled a patent row over LTO-8 technology that saw imports banned and production halted on the latest version of tape. None were available up until recently. Suppliers introduced stopgap measures. LTO-7 ‘Type M’ tapes were created using LTO-8 standards to squeeze more capacity from LTO-7 tapes. This was an imperfect solution as it complicates lifecycles. Future LTO-9 drives will not be able to read the Type M tapes.

The whole saga highlighted the weakness of relying on just two manufacturers. It goes to show that no type of media is completely secure. You can’t eliminate risk. The best you can do is mitigate it by combining different media in your storage mix. Or you can outsource the risk to a service provider to manage it for you.

Is a tape-based storage system difficult to manage?

There is lifecycle management to consider. You’ll need to decide when to upgrade and plan regular migrations. If you don’t have an IT Admin to manage the tapes, or you do have an IT Admin but their time is spent better elsewhere, LTO may not be for you.

We love LTO for long-term archive. If you sign up to our digital archive or library service, you’ll always have a copy of your original data written to tape. Usually two copies, stored separately, depending on your plan.

We also store clients’ own LTO tapes in our climate-controlled media vault in Lane Cove. Offsite tape vaulting is a great option if you have your own LTO infrastructure. You can keep a geographically separate copy, improve tape lifespan, and simply make space.

If you’re interested in the benefits of LTO but don’t want the hassle of managing it, get in touch. We’re be happy to talk through our archive setup or recommend options to suit.