Screen Forever 2018 is over. We survived four days of drinking, networking, learning, drinking and discussion. We even survived Jetstar and the weather, getting everyone back to Sydney in the end.

It’s time to reflect on the highlights. Here’s the Preferred Media take on Screen Forever 2018.

The networking. It’s fantastic to meet so many people who are genuinely passionate about creating and distributing great content.

The Forum Theatre. A stunning venue for the Awards and the closing party.

The ambience. Everyone was supportive, engaged and interested. Lots of breakout areas with seating for impromptu meetings and discussions.

Sitting at the back of the bus (on the Docklands Studio tour) is a great way to meet great people. So is the Tonic Bar.

Around 18-20% of films are made without any agreed distribution channel. ‘They just submit to festivals and hope to be picked up,‘ said Dominic Crisci of BMC Productions.

The most obvious measure of revenue is film box office, but when you look at the entire value of media and entertainment, it’s surprisingly tiny! Just over 3% of the total value in the industry. Here’s how the dollars stack up according to Neil Peplow of AFTRS:

You Can’t Ask That is one of the ABC’s best selling formats internationally. Along with – you guessed it – Mother and Son. Overseas versions have been made in countries including Israel, France, Italy and Spain. TeleMadrid even won an award for their version of the show. Kirk Docker and Aaron Smith explored how they choose participants and make the show. With such a barebones production, each element matters. Story arcs for each show and for each question. The importance of entry and exit shots to help the audience handle such confronting questions. How the question cards engage the audience. The use of text onscreen to add colour (but it can only be words that were specifically said to participants.)

It’s possible for anyone to become an honorary Tasmanian – especially if you get to the Tonic Bar after the first round of drinks.

Storing your project with Preferred Media – or indeed anyone else in Australia – is QAPE-able. (Just kidding, we knew that really. Honest!)  Get in touch if you’d like more information about storing digital content and project files (even the paper ones).

Melbourne really does do 4 seasons in one day.

You can’t get a show up in LA without an agent. And your agent will want you to go live in LA – if you don’t, it can add years to the networking process.

Just because every session has run late is no reason to assume the boat to the Gala Awards Night will be late too. The timing was tight – but not quite as tight as the headroom! 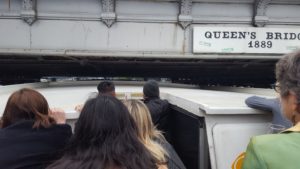 ‘Digital technology risks making us lazy about our craft.‘  The unexpected topic of a discussion with Paul Walton of Princess Pictures. For example, a misplaced boom can be eliminated in post-production. Or you can get instant feedback on the positioning of extras and reshoot, rather than planning in advance. But what does that do to your costs and is it the right way to go?

Who we met. And liked. And learned from.

Back of the bus, front of the queue! Laura Clelland and Mat Govoni.

Thanks Laura for insights into all aspects of production from your experience with Essential Crew. (Glad your clothes turned up too.) 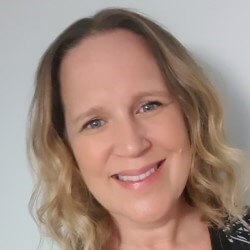 Congratulations again to Mat on his SBS First Look win. 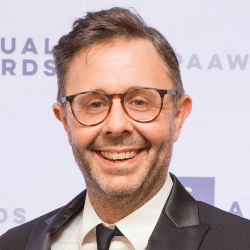 Paul Walton of Princess Pictures. This meeting was a long time coming, but worth the wait.

Stuart Talman of XE.com. A great guy working for a great company to help all the creatives deliver on their vision. And helpful to everyone, including us.

And a special mention to Martine Delaney of Roar Films, who adopted Bridget as her stalker and introduced her to countless other great people over the week. 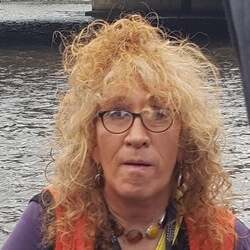 In case you missed it (or in case you did it, but didn’t get the answers) here’s the Preferred Media Screen Forever quiz.

5 questions about screen content and data. How many can you answer?